Denis Wick develops his trombone mouthpieces to help players achieve clarity, warmth and beauty of sound that no other manufacturer has been able to duplicate. His attention to detail and dedication to his craft has brought intonation and flexibility to near perfection, creating the highest standard in trombone mouthpieces. 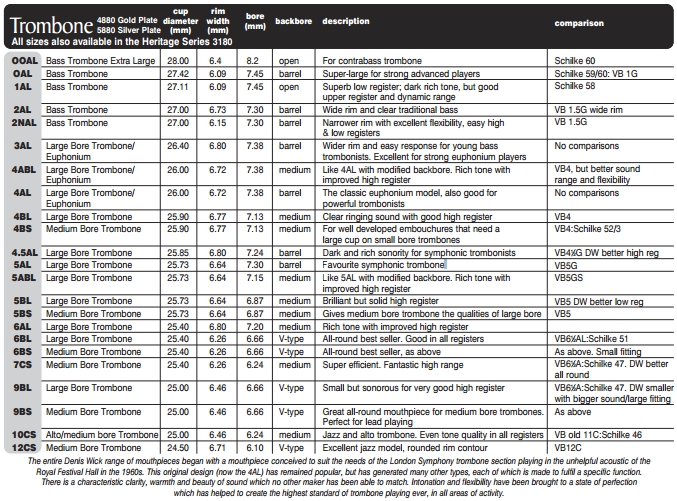 History of the 4AL

The 4AL is one of the most important and best-selling mouthpieces for trombone designed in the twentieth century. Here is a history of its development in Denis Wick’s own words.

“Having started the trombone revolution in London when we began using the newly available large bore Conn 8H and 88H trombones with my colleagues in the LSO, I was using a small bass trombone mouthpiece, the Vincent Bach 4G.  This made a magnificent loud sound, but had two weaknesses.  One was the need to be able to play a reliable high D – I remember describing this feat as being like getting a ‘double top’ in darts, i.e.  possible, but not inevitable.  The other weakness was a tendency towards anonymity (horn, euphonium, harmonium?) in soft playing.  This set me on the path of trying to find a better mouthpiece.

Having made certain there was nothing from any manufacturer that would do what I wanted, I began the tedious and slow process of trying to design my own.  I found an old Salvation Army euphonium mouthpiece at their Judd Street emporium when we had been rehearsing in the nearby St Pancras Town Hall in 1966, and it formed the basis of my first mouthpiece.  The all-important cup of this mouthpiece was a 19th Century design, the rim however was completely unusable and I felt that the cup should be a little deeper.  Otherwise competent engineers could never copy delicate curves of the mouthpiece cup and rim so I worked out a way to solve the problem.  Any engineer can copy a thread, so I took one of the least successful of my seven (all slightly different!) 4G mouthpieces, had the rim cut off and the inside threaded, then worked the same system on the old Salvation Army euphonium mouthpiece.

I could now screw the modern rim onto the ancient mouthpiece cup, with the additional advantage that I could vary the cup depth; with some plasticine to fill the gap, I was able to experiment with the cup depth.  This was almost perfect, and I asked many colleagues to help me with testing.  We all faced the same problem of trying to find the ideal mouthpiece, so when they realised that I was working on it, several of them said “When you get it right, let me have one” We all agreed that a final touch was needed, so on the next LSO visit to New York City, when we paid our regular visit to Bob Gardinelli’s shop I asked his advice.  He looked closely at the mouthpiece – “Uno momento!” – and vanished into the back of the shop.  He emerged two minutes later brandishing the mouthpiece from which he had taken a sliver of metal from the bottom of the cup.  I tried it; the result was sensational! The problem was solved! I had a mouthpiece with no bad notes, a rich full loud sound and a real trombone quality in soft playing.

Back again after the tour, I managed to work out the perfect projection of the mouthpiece from the trombone.  This crucial measurement was arrived at by a simple process of wrapping cigarette paper around the top of the shank.  I remembered that Tony Thorpe, my former LSO bass trombone colleague, from whom we had parted company in 1963, had mentioned a mouthpiece engineer, Bill Cox, who had a workshop at Broxbourne in Hertfordshire, a few miles north of London.  I duly paid Mr Cox a visit, the first of many that I spent in his tumbledown workshop, with two rattling lathes, a pillar drill, a slow-but-sure stove and shelves of miscellaneous equipment.  I proffered my prototype; he looked at it suspiciously: “I thought you said it was for a trombone! A bit big, isn’t it?”

“That’s the size I want,” I said; he asked “how many?”  I thought quickly; there had been several trombone players in the London orchestras who had expressed an interest in my idea.  “Could you make me fifteen – twenty?” Old Bill shook his head; “expensive,” he said.

“If I’m going to make twenty – five, I couldn’t guarantee that they would be all the same; it would be just as cheap to make a former – tool and produce 100.”

Fired by my own enthusiasm, I said “OK, make me 100!” Then I thought ‘What have I done?! Who, apart from my colleagues will want a mouthpiece that is designed for me, for my orchestra, in our concert hall?’ Bill said, “First of all, I’ll have to make a prototype.”

I duly returned in a few days to try it; it looked like any other mouthpiece, but had the special qualities that I was seeking.  Then Bill had another idea; “What about the outside?” he said.  I’d never thought about the outside, and must have looked nonplussed.  He grabbed the mouthpiece, put it into his lathe and with a few deft strokes, made the concave outer shape that has become so familiar.  What he did not know, and I had not realized, was that subtle removal of metal from that part of the mouthpiece gave it an additional brilliance, particularly in the high register.

Bill and I agreed to have my name and ‘London’ put on the outside of the mouthpiece and his next question was, “What are you going to call it?” Another blank look from me.  “What about ‘A’? Then you’ve got the chance of 25 more models!” I thought this mildly amusing, as this had never occurred to me! This was the mouthpiece that was to become the 4AL.”

History of the 6BS

The 6BS trombone mouthpiece was one of my very first designs. It was only the second mouthpiece that I developed, coming after the original ‘A’ model which became the famous 4AL. It was inspired by the Vincent Bach 6½AL. This mouthpiece dates back to the late 1920’s and was known as the Clarke Large and originated from Ernest Clarke, the trombonist, brother of Herbert Clarke, the most famous American cornetist of the time.

Over the years this model had been gradually reduced in cup volume and therefore sound quality. In 1968, I found an original from about 1930, and had my engineer measure it. The rim of the original was very sharp and not really usable, so this had first to be modified. After several weeks of careful, painstaking working, we slightly altered the curves in the cup and finally evolved the 6BS. This had a better intonation pattern and clearer and richer overtone structure than the Clark Large, as well as a much fuller low register. It has proved to be our best-selling trombone model over the years. It also comes in a large-bore fitting, the 6BL, and has variants for euphonium; the 6BM and 6BY which have slightly larger bores with European and very small Japanese fittings respectively.